“Bravi! Bravi!” someone from the Japanese opera company added over the applause. The 11-piece improv ensemble had finished about 40 minutes of playing a mostly unstructured experiment in free jazz after quick rehearsal that afternoon. The ensemble had never played together before: Two percussionists (a trap set and a conga set), three guitars (one taking the bass line), two accordionists (of course; this is Italy), and four saxes (three altos and the soprano of my ieiMedia colleague Michael Gold, now playing jazz in San Francisco almost full time since retiring as a magazine consultant). 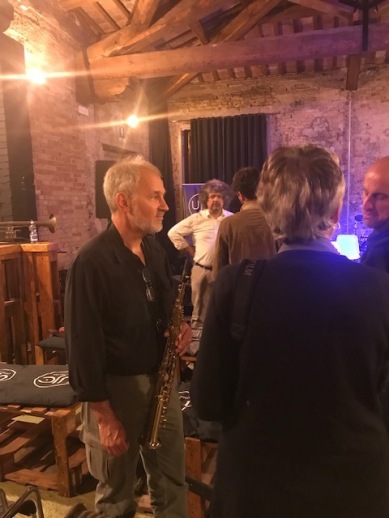 The conductor  was a famous jazz accordion player, ad-libber and showman, Simone Zanchini.

Zanchini is a triple maestro – a phenomenal technician of the accordion, a master of the classical repertoire with orchestras, and a wild showman who puts together a kind of performance art with jazz musicians of various skill levels. The performance I saw was of this sort. Zanchini didn’t play, but he kicked off the acoustical experiment – the opening section that was constructed of scratches and squeaks and rattles that each instrument could make outside its conventional musical design, each member intently listening to the others for cues that might be matched or countered. Before it began, the maestro spoke in Italian for about 10 minutes. The word I picked up on was ascoltare, or ascolti. . .to listen. They must listen to one another.

The Japanese opera company, scheduled to perform the next day in the courtyard below the Urbino Jazz Club, arrived in time to hear this introduction. About halfway through it, one of them, I think it was the wife of the Italian potter known to us, stood up confidently and began translating during a pause. Zanchini did not seem to appreciate or accommodate this. I think he told her to sit down, because that’s what she did, with calm Japanese aplomb.

After about 15 minutes of what I recognized as the kind of crazy nonsense we created under Bill Dixon at Bennington – what my mother would’ve laughed at and called “just noise” – Zanchini leaped up to the front and signaled a cue. Suddenly, in complete unison, the ensemble was blasting a half-familiar jazz tune. (I later learn: It’s Miles Davis’s “Jean Pierre,” which he based on a French lullaby.) That led to much more rhythmic improvisation, and to an original section of a couple of fast-paced ascending lines in 7/4 time, and I think 5/4. Zanchini would melt back into the dark, then rise again with wild directions, hand signals and arm-crossings, occasionally glancing down at one page of notation.

It ended with a splendid volcanic note that shook the 500-year-old wood beams overhead for at least a minute. Quite a show!

2 Responses to Late night at the Urbino Jazz Club