William knows traveling, so I let him be my teacher on how to spend the 300 miles of interstate from Knoxville on the last day of May. There’s nothing wrong with silence, my son tells me, and that turned out to be a fine way to go. But when I took my turn driving, I exercised my privilege to play a CD of James Taylor called “Covers.” Songs like “Why, Baby, Why,” and “The Wichita Lineman” turned into earworms in the silence. Between silences, we held good talk.

In his log cabin in Dobson, N.C., William is an experiment in self-sufficiency.

Will in Knoxville, just passing through

He welcomes the snakes into his new home to keep the mice in check. He shelters buddies from his Travelers Tribe who drop in. He’s foraging plantain and sorrel, and planting in small squares of sunlight on raised beds of rotting logs. He cut his own hair close to the skull, leaving a few uneven patches. His brother  says it makes him look like an escapee from an insane asylum. He does look a bit like Van Gogh in the Charity Hospital in Arles. “I was thinking about that,” he says with that droll smile, “and I like the idea that I’m escaped from an insane asylum.” The whole world has turned into an asylum, a godawful people-choked, carbon-fueled, job-enslaved asylum, and he’s breaking out.

His view turns the world upside down, like a soft version of a Jeremiah or a Jesus. “Get a job,” he gets told, and wonders why the rebuke comes from a man who hates his own job. “Don’t litter,” they say, when he tosses the fragment of one of his hand-rolled cigarettes on a city sidewalk. But to him, the cigarette butt will biodegrade a lot sooner than the litter of the sidewalk itself, and the road, which turns into this eight-lane interstate leaving Knoxville, a strait-jacket over earth, the thick long-lasting oily garbage of the Dump. The City Dump for him is the city itself, although they try to remove the more obvious garbage out to the country. William says he wouldn’t toss a cigarette butt in the country; he’d put it in his pocket.

We got home to Virginia in time for the gathering to remember Hunter, aka “Tugboat,” William’s best friend. Hunter was of the Travelers Tribe, train-hopping and Dumpster-diving, learning old-time fiddle to William’s old-time banjo. Hunter was the previous occupant of that Dobson log cabin,

Will and Libby at his cabin in Dobson.

which his father bought him. But he died of a drug overdose in New Orleans after Mardi Gras. William owns the place now.

We found the party following a narrow winding road up and down hills, over the Maury, under I-64, to a hidden, sparse settlement called Alone Mill. It was a tender slow-moving occasion to share solace, mostly with Hunter’s mom, Elizabeth, who seemed so profoundly touched by everyone and everything that I think her gratitude will get her through these days. (She also lost a brother in England recently, and is having to leave her apartment by Monday; we’re on tap to help her move and store things that won’t fit in the smaller place Freddie Goodhart was fixing up for her in the middle of town.)

I met Hunter’s father, Elizabeth’s ex, a big man with a rugged whiskered face, sizeable girth and yellowish white hair spilling over his shoulders. Later, he played old-time banjo here with his fiddle player from down in Surry County, N.C., Joe, and Andy  from Natural Bridge on guitar, and many others, playing or just listening in the dark. Also drifting into this glade around the 1840s farmhouse were the young

William’s little cabin in the woods

Travelers, Ruby and Ace and others with their fiddles and banjos and beer, holding back out of respect for their elders. The eating and the music came after nearly three hours of drifting around the lovely old estate with its giant trees, garden and lawns bordered by Alone Mill Creek. That was nearly three hours of consoling talk and drinking beer and wine. Shoulder the sky, my lad, and drink your ale.

One of the elders was James Leva, who fascinated me a few weeks ago when I stopped to hear the student group he was leading in old-time traditional sacred singing. It turned out, he’s a W&L English major from ’80, a Ph.D. from UVa., and was a French professor at VMI until he was laid off and had to go teach at places like the community college. Seems his life has been an honorable slow landing ever since those four Moveable Feast years 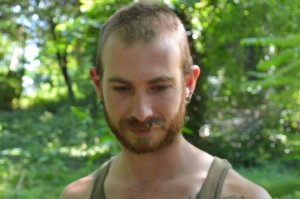 when a Fulbright brought him to a life in the center of Paris, where he met Samuel Becket and taught a French distiller the secrets of Virginia moonshine-making.

James recognized William. He had taught him French at Dabney Lancaster Community College (William had dropped out of high school, and needed the college credits to get into the Marines).

“Really?” I said, turning to William. “I never heard you speak French.”

“I didn’t either,” James said.

The flesh will grieve on other bones than ours
Soon, and the soul will mourn in other breasts.
The troubles of our proud and angry dust
Are from eternity, and shall not fail.

Will o’ the Woods