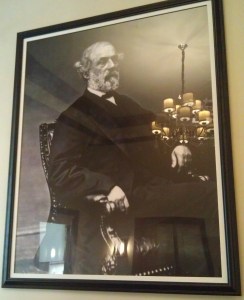 Robert E. Lee, in a Michael Miley photograph blown up and hanging in the foyer of the reopened Robert E. Lee Hotel (note reflection of chandelier), Lexington.

The Confederate flags are now gone from around the recumbent marble Robert E. Lee, at eternal rest with his riding boots on in the innermost sanctuary of Lee Chapel.

That is as it should be, for many reasons. One is historical. Our campus was a sanctuary of recovery from the Civil War, where “the sun falls through the ruined boughs of locusts/ Up to the president’s office.” That president was Lee, “in a dark civilian suit who walks,/ An outlaw fumbling for the latch, a voice/ Commanding in a dream where no flag flies.”

These are lines from “Lee in the Mountains,” a poem by Donald Davidson from the 1920s. He was one of a group of highly literary, romantic and vaguely unreconstructed writers based at Vanderbilt. On April 12, 1948, Washington & Lee, marking the 150th anniversary of George Washington’s foundational gift to then-Liberty Hall, conferred an honorary degree on Davidson and seven others.

“Lee in the Mountains” is a haunting meditation – as obtuse as Allen Tate’s “Ode to the Confederate Dead” – on Lee’s decision not to urge a guerrilla war of resistance in the mountains, but to set to work on re-building the South as a defeated section of the Union. But the poem seems a bit too wistful about that decision.

“I am alone,” the narrator says, “Trapped, consenting, taken at last in the mountains.”

It is not the bugle now, or the long roll beating.
The simple stroke of a chapel bell forbids
The hurtling dream, recalls the lonely mind.

I suspect that it is Donald Davidson, not Lee, who imposes the wistfulness. You can sense it in the other poems collected in the same book, also titled Lee in the Mountains. (The 1938 volume I checked out from the Washington & Lee library has Davidson’s signature in fountain pen.) The poet can’t seem to leave alone his obsession with finding redemption in being a loser. “For us, the long remembering/Of all our hearts have better known.”

This is worship of the dead, the rutted past, the washed-out soil. Davidson didn’t give up his fight after the Brown v. Board of Education decision of 1954. He organized a Tennessee Federation for Constitutional Government to defend segregation, and wrote a paranoid pamphlet about how the integration of schools in Oak Ridge, Tenn., was a pilot for the integration of the rest of the state. He was named as a character witness for John Kasper, the man later convicted of inciting violence in Nashville, including the bombing of an elementary school. Davidson sat in the courtroom in support of other racist bomb-throwers.

This was a sorry pose for a Vanderbilt professor of English, even in the 1950s. But it reminds us of a past we are apt to gloss over. One reason those Confederate flags needed to be removed is that the old battle flag was used in the 1950s by the Klan, the white Citizens Councils and Deep South governors in a last-ditch fight for white supremacy. Blacks seem to remember this history better than white Southerners. In 1956, when Davidson, a gentle poet at heart, was hanging out with a bad crowd thinking he was defending “state’s rights,” the Georgia legislature was changing its state flag to include the Confederate battle flag. Everybody knew what that meant then.

At W&L, the relatively new Roger Mudd Center for Ethics is spending a year reflecting on Race and Justice with a lecture series. Meanwhile, on Oct. 13 (Oct. 12 is the anniversary of Lee’s death in 1870), Christian B. Keller, a historian at the U.S. Army War College, will deliver a Lee memorial lecture at 12:15 p.m. in Lee Chapel, “Robert E. Lee, Great Captain: The Military Education of a Future Civilian Leader.”

And if you’re visiting Lexington for that, you might be able to book a room in the Robert E. Lee Hotel, a 1926 landmark that just reopened on Main Street with some of the splendor of the original.

[This originally appeared in Like the Dew: A Progressive Journal of Southern Culture and Politics.]