“Suppose one of you wants to build a tower. Will he not first sit down and estimate the cost to see if he has enough money to complete it? For if he lays the foundation and is not able to finish it, everyone who sees it will ridicule him, saying, ‘This fellow began to build and was not able to finish.’” – Luke 14:28-30

We began building a tower last year. No, not the elevator. And not the college room. Those were temporal, necessary things, and parishioners generously responded with Capital Campaign donations and pledges that have already covered the staggering cost — $600,000.

The tower I mean is the work of six parishioners who have met almost every other Thursday night for two hours since last June. In addition, in pairs, they have led 13 focus groups and conducted four individual interviews. This allowed more than 100 parishioners and staff to speak candidly about our church. Individuals spoke from the heart about the good and the bad. All points of view were invited and honored.

This “tower” is not temporal. It’s not even necessary – if God’s will for us is to maintain the status quo. But if we are actually striving “to renew the mission of [God’s] Church as Christ’s mission,” then this is the central project of that prayer we’ve been saying every Sunday. It is hard work. It is soul work.

The group of six volunteers began their labor with some hesitancy. The Vestry, I admit, was not very clear on the mission. We said we wanted “healing and reconciliation” after the wreckage left from our church-name decision.

Guided by two consultants from Cooperative by Design, the six met. They talked. They prayed. They asked for our prayers. Somehow they found enough clarity to give the group a name: The Discovery and Discernment Committee. At the heart of their work was an agreement they reached early on, a bond of trust. Members of the group represent divergent views on all kinds of church matters – not only the meaning of the name “R.E. Lee Memorial Church.” But they agreed to a strict code of confidentiality. They would not speak out as individuals, but speak only as a group. This was a covenant with each other and with the Holy Spirit.

While they will not voice individual viewpoints, they allow themselves to speak of their individual experiences. I have heard several of them say that the experience has been intensely spiritual.  They have knit themselves together in a bond of Christian love. They have come to know and trust each other on a plane resting above their differences. It was a surprise to some of them. It took time and trust. 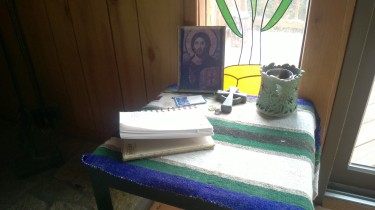 We now have the first phase of their work, the “Discovery” part. On the weekend of Jan. 13-15, the D&D Committee presented an eight-page report to the Vestry and to parishioners summarizing the feelings of all the church members who participated. Organized as themes or answers to eight questions, the report noted many good feelings and some serious problems. This is now the status of our tower: A foundation laid.

On Feb. 20, a letter from the two consultants arrived just minutes before copies were circulated at the Vestry meeting. Due to “unforeseen issues” that drove up their expenses and the time involved, they wrote, the $12,000 the Vestry had agreed on last April is not enough to complete the process. The consultants have already billed us for a little more than $11,000. They will need about $6,000 more than the original estimate to complete the job. It was supposed to be completed in March, but now it looks like it could go as late as May, they said.

The Vestry was concerned. That seemed like quite a cost overrun – 50 percent. Also, it was hard enough waiting for recommendations until March, and now it might take an additional two months? We discussed the matter with serious due diligence. We decided to have Keith Gibson, the Vestry member serving on the D&D committee as liaison, see if we can negotiate a less expensive conclusion. (That is to be discussed at the D&D meeting on Thursday night, March 2.) Could the length of planned meetings of the D&D and Vestry around the recommendations be shortened? Could we use one consultant rather than both?

It is now a week later. I am alone in a small cabin on Anne Grizzle’s farm, a sort of writer’s paradise called The Hermitage. Down the road is The Bellfry, the beautiful house where the Vestry held its retreat in 2016 in which the two Cooperative by Design consultants first made their pitch. Last month, we had our retreat there again, and had the consultants present the interim “listening phase” report. As I write this, the long-view of the mountains brings perspective.

What drove up the cost and the time was not the consultants’ doing, but the seriousness that the members of the D&D committee brought to this effort. Anne Hansen, a member of committee who is now on the Vestry, said this at last Monday’ meeting. The D&D members are all thoughtful parishioners who have held back nothing in the endeavor. Anne laughed to say she probably knows the others better than she knows anyone. Keith made a similar point. It is our faithful parishioners who are driving this thing. That’s how the consultants described their approach at the beginning. It is our path, our transformation, “by design.”

I understand the Vestry’s concern about the extra $6,000. I know some members of the parish were opposed to hiring the consultants in the first place.

But we are at a crucial point now, one in which balking over this could leave the whole process unfinished. If members of the D&D committee are being low-key about this, it’s because they are not ready to present action items. But there is no good shortcut. Several of them have made that clear to me. One even said the effort would be rendered “meaningless” if the consultants were cut back now. This is our expense that we caused, for good reason. It’s not like Nielsen  Inc. discovering our stone walls were a lot thicker than they realized. We have made the commitment to the consultants and there’s an obligation attached.

Really, it’s not a lot of money for what we are faithfully seeking. We need a little patience and faith. My own sense of this process is that the most powerful result will be not so much in the recommended “action items” we will get at the end. Rather, it will be in the experience of the Discovery & Discernment Committee that is bodied forth as a model, a light that can be replicated and multiplied among us.