After tragic fire in historic synagogue: Shared space or hyper-gentrification?

NEW YORK — An abandoned synagogue that for 120 years housed New York’s oldest Eastern European Jewish congregation was not noticed much – until it lit up the sky last May.

The flames that pillared up from Beth Hamedrash Hagadol that Sunday evening, Mother’s Day, caught residents’ attention more than two miles away. People who knew the history of this neglected site in the Lower East Side began calling one another, like relatives when a loved one dies. 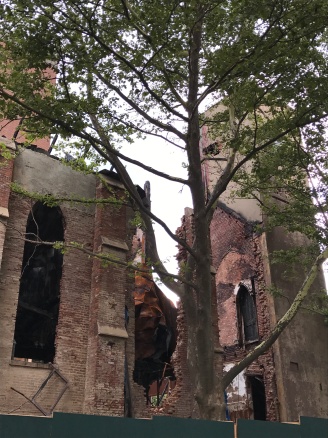 Elissa Sampson, an urban geographer who had long hoped for the building’s restoration, got such a call, but couldn’t bear to go outside and look. “I had a very good sense I didn’t want to see its demise.”

For another neighborhood preservationist, avoiding the pain took longer.  “I couldn’t go there for about two weeks after the fire,” Holly Kaye, founder of the Lower East Side Jewish Conservancy, told a Landmark Preservation Commission (LPC) hearing July 11. “It’s just a tragedy.”

Now the question that neighbors and preservationists are asking is this: If any portion of the looming ruins can be saved, will it be used as part of a shared community space that honors the rich immigrant history of the Lower East Side? Or will it become another iconic gesture embedded in another multi-million-dollar luxury apartment building?

The cathedral-style neo-gothic brick building, whose name means “Great House of Study,” dates back to a Protestant church in the 1850s. Its first rabbi in the 1880s, Jacob Joseph, was the city’s only “chief rabbi,” a European title that didn’t last in New York beyond Rabbi Joseph’s massive funeral in 1902. Beth Hamedrash Hagadol’s rabbi from 1952 until his death in 2003 was Ephraim Oshrey, a noted Talmudic scholar and Holocaust survivor. 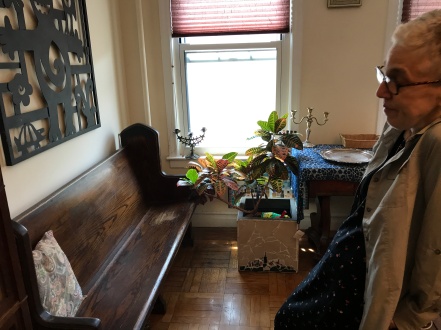 Elissa Sampson, an urban geographer, observes a pew in her home from the original 1850 building.

In her residence several blocks from the ruins at 60 Norfolk St., Sampson points out a piece of the original synagogue, a short wooden pew, that survives in her home. She flips through the pages of The Synagogues of New York’s Lower East Side, a 1978 book she helped update for a second edition in 2013.

There is a photo of Rabbi Oshrey, a remarkable religious leader who drew many old-time as well as newly arrived Orthodox Jews to the synagogue. Sampson said he played a leading role in saving the building when much of the Seward Park area fell victim to “slum clearance” in the 1960s. Oshrey had the building “landmarked” in 1967, the early years of New York’s powerful Landmark Preservation Commission.

“Rabbi Oshrey, being no fool, did not want to lose his synagogue,” said Sampson, who is also a visiting lecturer at Cornell University. “He understood very well its history and was in a good position to know why it was important.”

The landmark protection of the building became a hindrance to finding a viable commercial future for the synagogue. In 2012, Rabbi Mendel Greenbaum, the son-in-law of Rabbi Oshrey, filed a hardship application with the LPC for relief from the landmark restrictions. (With no remaining congregation, ownership of the synagogue had been transferred to “Beth Hamedrash Hagadol of New York Restoration, Inc.” for $10, according to a deed dated May 13, 1969, signed by the new owner Aron Mendel. Mendel lives near Rabbi Greenbaum in a Hassidic section of Brooklyn.) 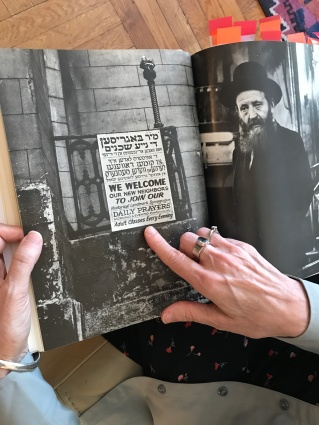 The LPC did not grant hardship relief in 2012.

At the July 11 LPC hearing after the fire, several speakers aired rumors or suspicions that neglect of the building since 2012 was deliberate, since its real estate value has risen by some $6 million since the fire.

Holly Kaye, who had been working for 20 years to save the synagogue, quashed those rumors. She said Rabbi Greenbaum’s request for hardship relief outraged the community, but when she talked to the rabbi about this at that time, he immediately withdrew the application and completely changed his outlook. Since then, she said, he has worked with community groups and potential development partners to save the synagogue.

In fact, Kaye said, a meeting about a preservation plan was just days away, with the Chinese-American Planning Council and other development partners, when the synagogue was ravaged by the fire. To imply that the rabbi had anything to do with the fire “goes against everything that I know,” she said.

Sampson agrees. “While the rabbi is indecisive and did not take the right steps from 2007 to before the fire to secure the building and restore it,” she said, “there’s a distinct difference between saying that and connecting it to the arson. It has absolutely nothing to do with the arson.” The building wasn’t even insured – or insurable, she added.

Rabbi Greenbaum did not respond to email or phone calls.

Whether or not the building could have been more secure or in better shape, the deterioration was so advanced, Sampson had ceased giving tours of the interior. The mold was a liability, she said. There had been other minor fires inside, and young people were frequently breaking in to party. Bernice Cincron, manager of the high-rise residential building next door, said her supervisor would call the rabbi whenever they noticed a break-in.

Police questioned three 14-year-olds suspected of being in the synagogue when the fire started, and released one of the juveniles after charging him with arson.

The LPC disappointed the applicant, who wanted permission to conduct the demolition completely free of landmark restrictions. Instead, the LPC granted the right to remove all unsafe portions in accord with engineering studies by both the LPC and the owner. The engineering studies agree that most of the walls and towers are too unstable to be saved. But once the remains are safe, the owners and development partners are to assess how these might be incorporated in a new development plan.

This gives community activists some hope. The day after the July 11 decision, the online Bowery Boogie published an upbeat, anonymous op-ed by a resident who lives across the street and watched the fire from there.

“I have been fortunate enough to travel the world, and have seen amazing culturally significant buildings transformed into parks, galleries, municipal buildings and other structures,” the resident wrote. “We as a community, if we think creatively, can do that with the space and structure that is salvageable at Beth Hamedrash.”

This is Elissa Sampson’s hope. It’s not so much a matter of how much of the physical building remains, but how it is used. One vision is something like the re-purposed synagogue at 172 Norfolk St., a Reformed German Jewish synagogue older than Beth Hamedrash Hagadol that was saved from the wrecking ball by Spanish artist Angel Orensanz. Today, that brightly painted building is a cultural center, a wedding venue for celebrities, a highlight of Lower East Side tours and rented space for a Reform Jewish shul.

The contrasting vision that Sampson fears is hyper-gentrification, embodied by the 16-story glass Blue Tower at 105 Norfolk St., where apartments rent for as much as $18,000 a month and the top floors sell for $7 million, according to Lower East Side Tenement Museum tour guide Laureen Fredella.

“So the real stakes in the Lower East Side are that of belonging in terms of long-term residents, and fostering a sense of belonging in new-time residents,” Sampson says. “It’s across the board, in having equity in the neighborhood in ways that play fair whether it’s access to green space, public space, housing, and having diversity.”

Historically, the area was the most densely populated place on the planet and an incubator of the hope, liberty and faith of American immigrants. Now, Sampson says, it’s one of the most economically stratified neighborhoods in New York City.