Last Thanksgiving, our house was filled with fiddle music. Old-time fiddling spilled out of the road-worn fiddles of two of William’s friends, Hunter Riccio and Cyrus Carawan. It was a beautiful sound, as if the fog had come rolling down from our Allegheny mountains and condensed around the great platters and wine vapors of our all-day Thanksgiving feast. My parents and mother-in-law were there, and brother Bryan from Nashville and sister Anne from Atlanta and their mates, a niece, our children, including William, and a bunch of his tattoo-and-road-grime buddies, Eric, Hunter, Ruby, their pit bulls, and I’m not sure when he showed up, but sometime after dinner, Cyrus.

Cyrus, I came to learn from him and his fiddle-magic, had been a child prodigy. At age 11, he had won first place in the youth division of a Florida all-state competition for fiddle playing. The following year, at age 12, he entered the same contest in the adult category, and won first place. The legendary Vassar Clements, pioneer of “hillbilly jazz” fiddling, was a judge in that contest, and gave Cyrus private lessons as his prize. 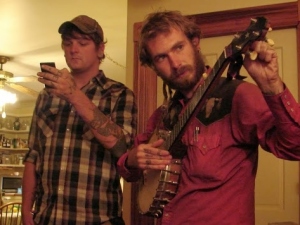 The food, the wine, and the music lifted us all into a long evening of great fellowship. Cyrus seemed most at home in that spirit. It’s true, the spirit of the wine was particularly involved in his case, but Cyrus floated on that spirit with a sweet nature that was hard to resist. He became like a member of the family, sharing his life story with a fetching note of pride, offering to be a contractor for the work we needed doing on the falling plaster in our stairway, and playing his fiddle. Man, could he play that fiddle, like the Mountain Whippoorwill: Fire in the mountains, snakes in the grass, Satan here a-bilin’, oh Lordy let him pass. He could play off of anything we would improvise, from my tenor saxophone to Bryan’s fancy jazz-country guitar chords. The ad-libbing got tighter and wilder and didn’t want to stop. I think it was midnight when it finally gave out.

On Monday, Aug. 4, Cyrus Caraway was killed when the car he was riding in, along the winding Maury River Road toward Goshen Pass, left the highway, hit a tree and caught fire. The driver, two years younger than Cyrus, was also killed. The funeral I attended on Sunday with Libby, William and Elizabeth Shields, was a difficult mix of Cyrus’s true life of friendship and music (beautiful words from friends Spencer McElroy and Jeff Bane) and the conventions of that particular church (obviously not Cyrus’s church or his type of music). The coffin was wheeled out covered in flowers and the many rosette ribbons he had won in fiddle contests; a young woman following the coffin carried his fiddle and bow.

Cyrus’s fiddle has lost its master, and so has the other fiddle that en-souled our Thanksgiving. Hunter Riccio, Elizabeth Shield’s son and William’s best friend, died in March in New Orleans. He was 24. Cyrus was 28. Whippoorwill, fly home to your nest.

Who can explain it? All I know is that I am so grateful that we opened our doors to so many people – family and sojourners – for that Thanksgiving, and that we have a house big enough to let Elizabeth stay here until she can find a new home.