The Second Greatest Invention Ever

I’ve let too many emails pile up in my Outlook — thousands upon thousands. So I’ve been deleting them by the score these last few days. I’m up to the year 2009. But I won’t do a wholesale delete (even if the system allowed that) because there are too many letter-like emails I want to archive. For example, here’s an exchange between me and my father, from March 20, 2009): 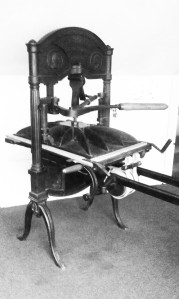 The Washington printing press at W&L

You would’ve enjoyed my presentation of a demo of our 1848 printing press, which two women (a Dutch-American librarian here, and the wife of our dean, who ran a letter-press business when she and her husband were at Princeton) inked up and operated for a group of about 12 that I pulled together for yesterday afternoon.

I kicked it off with a brief (10 minute) pep talk on why this wrought iron and worn wooden-handled machine (virtually the same technology as Gutenberg’s press 400 years earlier) was the second greatest invention ever. (Thank you, the student who took the prompt and asked: Well, what was the greatest?) The greatest invention – cheap, universal, flexible, sustainable, reaching across the world and across the generations – was: the alphabet. Especially, by our good fortune, the 24-letter Phoenician, Greek and Arabic alphabet, which became the Latin letters that made movable type possible (why the great civilization of Ancient China never got this far – too many ideograms).

The printing press was an amazing thing, the Rube Goldberg boundary between the old and the new worlds of human consciousness. Not that it created civilization – the Greeks, Egyptians and 15th century Florence did fine without it. But it created something new and dangerous – democracy and education (both words created by a man inspired by the printing press, Sir Thomas Elyot, T.S.’s ancestor), as the early 15th century was a period when national languages came into their own. Sir Kenneth Clark calls this chapter in his Civilization book “Communication and Protest.” We’ve been protesting ever since, inventing crazy ideas like “rights” and “the priesthood of all believers.”

Another amazing thing about the printing press: It was the first mass production ever. The beginning of our modern economy was to duplicate words on a page! All other mass production followed.

And another thing: Gutenberg didn’t invent anything, but put together about seven ideas from existing crafts, some quite old. For example, the giant screw that brought pressure from the platen to the bed was from wine and olive presses, or maybe bookmaking presses. Mixing a new ink that didn’t bead up like a net on metal required a linseed varnish the painters were starting to use. The mold for type couldn’t be sand, as the monks had used, because typeface had to be much more precise and even, so he borrowed the casting techniques from the Mainz Mint (he had an inherited association with that guild). And so on.

Doug – That was a mind-blower and a delight. I knew much more than the average know-it-all, having taught and been caught up in the printing press, made short movie of a linotype, in operation; would read and weep at Paul Gallico’s great short story about one left-over guy in the newsroom who gets call from stringer of gang murder in the capitol (Like Valentine’s Day massacre ) and how he gets the production crews from bar getting drunk and  a dozen creative improvisations to get ‘em rolling. (Forget name of story).  But your presentation was full of new, dazzling  connections of what makes us be us.  Eliot’s ancestor inventing words democracy and  education? (Come on now.)

But it is brilliant , and smothers the scene I’ve just invented  I wanted to tell you of for the Tate Play wherein Bo, playing the hustler Ace who wants  $100,000  to make rock band famous is cussed out by Grumps who suspects him as con artist (which he is) but accuses him of knowing nothing of real big band music and Grumps gets turned-on nostalgic and tells of how his first big band (mine) was Charlie Spivak and reveals his proudest possession (he gets it out) a trumpet that was originally Spivak’s. Ace picks it up and delivers the famous Spivak theme song, an unaccompanied F octave (Star Dust?). And then he shows his virtuosity on an  acoustic  guitar (playing and singing “Lazy River” ). This converts Grumps, to his regret.

But  that’s trash to your molten gold of an inspired  and stunning connected  wisdom.