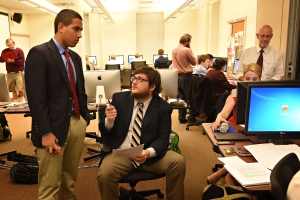 The third floor of Reid Hall glowed in the dark on Election Night, Nov. 4.

I had an inconspicuous job of copy-editing for Rockbridge Report’s election coverage, the only live TV broadcast and web report on the voting in Rockbridge County. I felt  like a mere sub-contractor with no real relationship to the students who were sailing the ship. But I had taught some of them in past years, and felt the thrill of seeing them all in action around the energy of an election night as deadlines and vote returns fluttered by. The whole floor became the kind of buzzing, pizza-messy, nighttime newsroom that we elders — the recovering journalists — could feel in our muscle memory.

Maybe that’s why we were all there – not only Brian and Kevin, the instructors of the Rockbridge Report classes, and Jenny and Michael the support staff, and Claudette, whose 202 class had some involvement, but also Toni, Dayo, Pam and me and even Aly, our new Knight Chair of Journalism Ethics, weighing in with ethical umpiring. We tallied up our collective experience of covering elections, and it came to somewhere over 200 years.

Maybe those 200 years of doing it the old way supplied some subliminal guidance. But it was the students’ show, and they performed like pros. They did live broadcast updates on the hour, studio interviews, live interviews out at the campaign gatherings, tweeting, calling in, feeding the graphics. You should’ve been there.