A Tory ghost on the Lower East Side

Last July on the Lower East Side of New York, I was draining the ice cubes of my second cocktail at Schiller’s Liquor Bar on Rivington Street when I fell into a trance. Rivington himself seemed conjured up from the vasty deep of history.

Greetings, honored colleagues of the American press. I am James Rivington, or Jemmy Rivington to my friends. A “Judas” and a “servile wretch” to my old enemies. But that was a quarter century ago, during the tumultuous years of the American Revolution. I am an old man now, 78 years of age, and I have made my peace with God and my fellow man. I wish only to set the record straight on a few points of my character and my actions during those heady years when I published one of the finest newspapers in America.

I was born in London in 1724, an age when wit and fashion met in the coffeehouses and taverns, and everywhere, presses were cranking out magazines and books.

I grew up to learn the ways of a gentleman – which meant settling into my father’s business and enjoying life. Since my brother John was handling the family publishing business well after Father’s death in 1742, I eventually started another publishing shop with a partner named John Fletcher the playwright.

By temperament, I was a gambler. Many gentlemen are gamblers, but my love of gambling was inordinate. I lost as much as 10,000 pounds on one trotter at Newmarket! But then Fletcher and I made that much in profit publishing Smollett’s magnificent History of England. The life of a gambler is a life of sudden turns in the wind.

A favorable wind blew me out of England to seek my fortune in America in 1760. I landed in Philadelphia, set up a bookselling shop there, and tried my luck setting up similar businesses in Boston and New York. I helped devise a wonderful scheme for selling land in Maryland by a lottery. But this investment collapsed utterly, and I was left in ruin.

I started my New York print shop right here in Hanover Square in 1773 and launched my weekly newspaper, the New-York Gazetteer. It was a fine newspaper, lovely typography, the royal arms on the masthead, written in the King’s English, and a vital balance to the radical non-sense being printed up in Boston around this time. I printed all sides of the issues, “Open and uninfluenced,” “to please readers of all views and inclinations,” and I protected the identity of any author who wished to be protected. I had an astonishing circulation of 3,600. 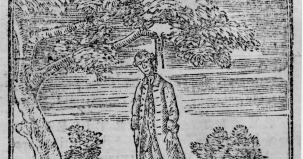 Publishing the only major Tory newspaper, I decided to reach the widely dispersed readers of that political stripe. So to the name The New-York Gazetteer I added or the Connecticut, Hudson’s River, New-Jersey, and Quebec Weekly Advertiser. I even considered adding “West Indies,” but it wouldn’t fit on the masthead.

Well, 1775 proved quite a tumultuous year. The more I sought to give a calm, balanced account, the more the so-called Patriots attacked me. A mob from New Jersey hung me in effigy. To show my contempt for this insolence, I printed a woodcut of myself hanging from that same tree, well-dressed and bewigged, as always.

Then came that thug “King” Sears, a leader in New Haven of one of those so-called Sons of Liberty gangs. He led a rabble to come attack my press. Soon, I was under arrest, but was pardoned.

Now let me tell you another story. You will be astonished when I tell you that I helped General Washington win the War of Independence in 1781.

I returned to New York in 1777, when it was safely in the hands of the British Crown. General Washington had been ignominiously routed. The Crown promised me 100 pounds a year to be the official newspaper of the royal government here. I resumed my bookstore business and opened a coffee shop. The latter was very popular with the British officers, which made it an excellent place to gather the freshest news for my paper. This also made it a perfect place to gather intelligence for the Patriot cause. Yes, that’s right. I was engaged in espionage for the other side.

By 1779, I could see which way the Fates were tending. I was a gambling man and I bet on your great country.

I knew Washington, and his spies knew me.

In 1783, Washington entered New York in triumph. The British soldiers had withdrawn, and virtually all Tories had fled to Canada or back to England. Except me. Now why do you think I was protected? And why do you think Washington came straight to visit me in my bookshop? I took the general into a back room, telling him I had an important agricultural book on order for his plantation work in Virginia. The door was slightly ajar, and two of Washington’s aides heard the clinking of two heavy purses of gold being placed on the table. That was my payment. I took it, only because I was in terrible debt. The Crown had failed to pay me what it promised.

Call it the fair settling of accounts between gentlemen, for a gamble that won the day.

I am again in poverty. My paper and other businesses failed. I was in debtor’s prison a few years ago. But I am a loyal American, and will remain so until I die. In fact, I will make one more bet – and that is that I will expire in three days, on the exact day of this country’s glorious statement of independence, July 4. Then you will know, that I was a true blue American, and a damn good bettor.

I finished a scrumptious dessert and drifted out onto Rivington Street. Schiller’s Liquor Bar closed down the following month, victim of rising rents in the most economically stratified neighborhood in Manhattan.

[published in “Clio Among the Media,” the quarterly newsletter of the History Division of the Association of Education in Journalism and Mass Communication, spring 2018.]