Libby, at far left, was one of the grant writers on the UTO grant.

“An actual saint was in this place, think of that,” Col. Keith Gibson told fellow church members gathered in the new Jonathan M. Daniels Community Room underneath the sanctuary of Grace Episcopal Church.

The Sunday dedication and blessing, Feb. 3, was not only the official unveiling of the room honoring an actual Christian martyr recognized by the U.S. Episcopal Church – Virginia Military Institute valedictorian Daniels, murdered in Alabama in 1965 while protecting a fellow civil rights protester. The dedication service also moved into the larger restored space – now called the Brooke Family Undercroft.

Then it moved into a refurbished third room, the Sacristy, where sunlight played through old gothic windows onto fresh-painted walls. “Blessed may you be, O Lord,” recited the Rev. James Hubbard, the interim rector.

The $325,000 renovation has brought back to life the 136-year-old undercroft of the former R.E. Lee Memorial Church. This lower level of the limestone church building at 123 W. Washington St. had been virtually unused since it was outgrown in 2007 by the early learning center Yellow Brick Road. 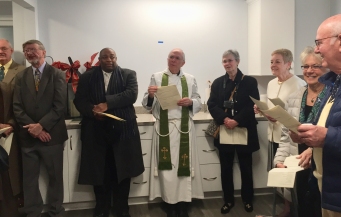 Now it is the newest space in town for choir rehearsals, church meetings and community activities. It has even become the new home of the “Wednesday Morning Bluegrass Jam,” a local tradition that has survived some 25 years in various coffeeshops around Lexington.

The renovation, by Phoenix Construction, was supported by the second phase of the parish’s three-year capital campaign and by a United Thank Offering of $47,000 from the national church. The UTO grant was specifically to pursue the national church’s agenda of racial reconciliation under the motto of “Becoming the Beloved Community.”

An article last week by the Episcopal News Service described two years of intense debate over the church’s name. “The process of congregational soul-searching began in the wake of the 2015 massacre at a black church in Charleston, South Carolina, by a racist gunman with a fondness for Confederate symbols.’”

The vestry of the church voted in September 2017 to restore the original name of Grace, replacing the name it had borne since 1903, R.E. Lee Memorial. Robert E. Lee, when he was president of Washington College, served as the senior warden of Grace Church. 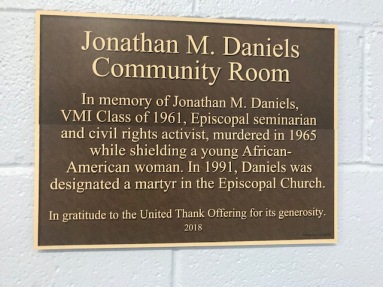 Jonathan Myrick Daniels, as a cadet at VMI, attended the church and sang in its choir. In 1965, while in seminary in Cambridge, Mass., preparing to become a minister in the Episcopal Church, Daniels heeded the call of Martin Luther King Jr. to join the fight in Selma for equal voting rights. After responding clergy left the area and Congress passed the Voting Rights Act, Daniels returned to work on voter registration and breaking down racial barriers. He was killed when he stepped into the line of fire to protect a young black woman who was the target of a parttime deputy’s shotgun. The Episcopal Church honors him with a Feast Day on Aug. 14 and his name is among martyrs (including King) named in a chapel of England’s Canterbury Cathedral.

The refurbishing of the 1875 Sacristy was underwritten by the Helen S. and Charles G. Patterson Jr. Charitable Trust Foundation.