Louise Mikell is an 89-year-old black woman living in Lexington, Virginia. She graduated from Morgan State University in Baltimore and received her master’s in education from George Washington University. She is considered the “unofficial historian” of both the black community of the Rockbridge area as well as Cedar Hill Church, a historic black Baptist

church regularly active from 1874-1927.  Her father was a member of this church and Ms. Mikell, along with her associates, revitalized it, helping the church onto the National Register of Historic Places. Once closing down in 1927, the church had no use until 1965 when leadership, including Louise Mikell, established an annual meeting held in August to celebrate the history of this black community, which went on for fifty years.

On November 28, 2018, Ms. Mikell met with Washington and Lee freshman Nick Mosher in her home in Lexington to discuss Cedar Hill Church and her involvement with its preservation.

NM: I know you were born two years after Cedar Hill Church closed down but what caused you to become the sort of, unofficial historian of the church?

LM: Well, in 1965 the persons who were the children of the members of Cedar Hill decided to get together and open Cedar Hill and clean it up so we could have a summer place to go. And so the young people could all get there and have a chance to know something about Cedar Hill and their grandparents and great grandparents. The first group of persons who opened the church were the Ezans, Edna Johnson, John Johnson, Ophelia McCutchen, Hansford McCutchen, Alice Moore, and Sarah Cheek. They got together out there and decided they were going to clean up and fix up the church and have it as a place for the third Sunday in August for the young people to come and enjoy and have a picnic and have a service and just be together as family members. Basically, at that time the families that really participated were the Morrisons and the Johnsons and McCutchens, the Beals . . . [These] basically were the people who participated in opening the church again. And that was in 1965, so we opened the church and had activities and things for fifty years. And then during that particular period of time Ophelia McCutchen was most instrumental in putting a program together. Then after Ophelia I think it was Alice Moore who took over putting a program together for the summer program. And the date established was the third Sunday in August and that was in 1965 and then through the years Alice became the main leadership in putting the program together. And then I became the leadership in putting the program together after Alice passed . . . in 1998. But during the course of those years when I was the person pushing the program we had a lot of things that took place. The church became part of the historic preservation for the state and the National preservation.

We had a lot of different persons who came to speak and we had children’s programs and persons in the family who were ministers and persons who were capable of bringing a good specialty of something they wanted to say to the group. And it was a delightful situation, we had so many people all through the county who came. It was just crowded really, and that went on for fifty years. And I guess it still could be going on but I just stopped it! [Laughs] I said I was tired of this and no one decided to pick it up! My daughter tried to pick it up . . . She did the last summer that we participated and got together. She had her husband to speak at First Baptist (the historically black church in Lexington) . . . We had the food downstairs at First Baptist because when [Cedar Hill] closed, the people all came to First Baptist because it was a Baptist church out there so they brought their membership to First Baptist.

NM: So you said the church closed in 1927 correct?

NM: So what caused this once really popular church to close down?

LM: Well, the black people died number one. And number two, they didn’t have a school out there for their children to go to school. And then number three, they didn’t own anything . . . and they couldn’t, they weren’t given the opportunity. So those were basic reason why the people left out there. They were working on the farms and that kind of thing. And they were making a good livelihood, but they weren’t able to own a house or anything of that nature so it was well that they made an effort to move so my father came here and bought this house and it has been in my family ever since 1915, and that happened to many families and by that time there weren’t many families left out there really.

NM: Where did a lot of them go?

LM: They came to Lexington and they joined First Baptist Church down there.

NM: What were some of the reasons for moving to Lexington?

LM: Basically, because of the fact they couldn’t own a piece of property out there and for school, for their children and those were the basic reasons, for moving – living conditions and housing. They were looking for better situations, jobs, that kind of thing. And they joined First Baptist down there.

NM: When you revitalized the Church, was it used as a church or more of a community center?

LM: Well, we just went there one day in the year. And we would go to First Baptist and have a worship service and then have dinner in the yard and meet family and friends. It was just a great day, and it would be dark before we left. [laughs]

NM: Would you say this celebration was a gathering of friends and family or a time to worship or would you say it was celebrating, sort of, the black community of Rockbridge County?

LM: Well, no black people lived out there by this time.

NM: Right, sort of the history then I guess.

you just can’t imagine how it was, it was just wonderful really. Most of them lived away, they didn’t live here. But friends here in Lexington came too because it became a very popular day that everyone looked forward to over the summer and before.

LM: I have books where they have written down every penny that people gave years ago, in 1830 they gave one penny! Two pennies! Whatever they had, it was just wonderful really. So that history goes on for all of those years and I don’t know what’s going to happen to Cedar Hill, it rather disturbs me really . . . I really think it ought to be a meeting house in fact it was dedicated as a meeting house and a place of worship, that’s what the idea was. And no longer black people live out there, there was once a time when a group of people wanted to rent it for a church but Edlo and I talked, oh well, it didn’t go anywhere and we didn’t get that done so now it’s just sitting there I don’t know what’s going to happen to it ‘cause I’ll be gone. [laughing]

NM: What caused you and the rest of the leadership to choose Cedar Hill Church, I guess my question is why Cedar Hill? What was the historical significance that made it your rallying point for those who wanted to celebrate their history?

LM: Well, it was because of the fact that that’s where our people came from. That’s where they went to church. And before that church was established they had church in their homes out there, along the creek banks, along the tree line in the mountain. In fact, before they had Cedar Hill they had church on top of a high hill where the big oak tree was and they had just sat around on logs and had service. In fact, I understand there is someone buried up there, and that’s on the Harris farm and that farm belonged to John Riplogle, and he gave the land because it was right attached to his farm.

NM: Taking it back a little bit, can you tell me the origins of Cedar Hill, sort of how it came to be?

LM: I don’t know other than John Riplogle gave that land for a church. They were having service on the mountain, under the great big oak tree. And evidence was still there some years ago. I don’t know if the evidence is still there. And the houses were all along the base of the mountain. Years ago when my father and mother used to drive out there after I got to be seven, eight, ten years old – they would point out to the mountain, the side of the mountain and their used to be old houses there where those people lived . . . They used to point out some of the names of people who lived out there. Well it was just their home! And they just tried to stay close to their homes, really.

NM: What do you hope happens to Cedar Hill?

LM: What do I think?

NM: What do you hope – or what do you think is going to happen, if those are two different answers.

LM: I don’t know what’s going to happen, I don’t know. It has been my thought that Cedar Hill Church – I tried to give Cedar Hill Church to First Baptist Church, down on Main Street. I tried to give that church to them. But of course First Baptist didn’t want it because of the fact that well, they were able to keep First Baptist. If they were able to pay the bills on First Baptist then they were lucky! So, I wasn’t able to get that done, I just always said well, First Baptist could use it as a retreat place and that kind of thing for their church and for the young people, et cetera. But now, the only thing I can see, if anyone wants to buy it, they need to sell it. Because nobody is going back out there to have service, they need to sell it to any congregation who wants it. Because of the fact that churches are churches and they are meeting places for friends in the neighborhood and the community . . . I hope it will be sold, really because the cemetery is there, and the cemetery could use the funds it got out of the church to keep it up . . . and do little things around there to make it a nicer looking place. [laughing] I don’t know what’s going to happen to it!

NM: What were the reasons behind the Church becoming a registered historic place? 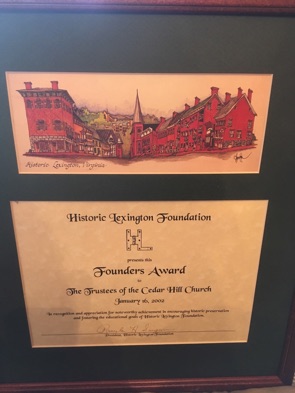 LM: The reasons were that it had been the religious place of worship for the group of black people who had lived in that community all of their life and it was used as a school at one time. . . . Those were the reasons that we put in the application to get a historic trust and the length of time that building has been sitting there. And that building was dedicated in 1874 but those people had been worshiping wherever they could before that building. See, that building was given to them by John Riplogle. And the first building burnt down, and they built the building that is there now because the first building was just a log cabin, in fact, it didn’t even have a floor in it I’m told, and so they built the second building and the church is in good shape!

LM: I hope this has been a help to you.

NM: It really has, thank you so much.