This past weekend, a different civil war drew nearly 100 mediation experts, Episcopal bishops and war victims from as far away as South Sudan and Omaha to the little city where Robert E. Lee and Stonewall Jackson are buried.

The three-day gathering, “Uniting the Diaspora to Act for Peace,” was declared a success at the churches that hosted it, primarily Grace Episcopal and Lexington Presbyterian. The weekend was a rare mix of light cultural exchange between Lexington and South Sudan – with ethnic foods, African singing and colorful crafts – and heavy discussions regarding mass violence and elusive justice for that east African nation. 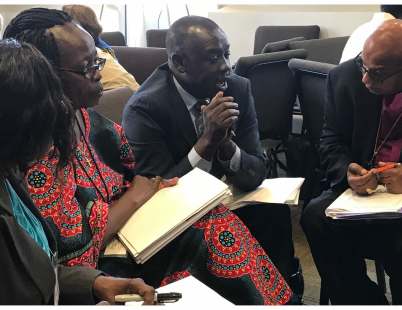 The American Civil War that draws history buffs here is dwarfed in scope by the last 60 years in the Sudan, then the largest nation in Africa.  After two lengthy post-colonial civil wars, South Sudan split off in 2011. But two years later, it fell into its own civil war. A fragile peace agreement last year is holding, but more than two million people remain displaced by the conflict, according to Jacqueline Wilson, a mediation consultant who helped organize the Lexington conference.

And that’s not including the thousands in the North American dispersion, or diaspora, such as a diminishing community of about 80 in Roanoke.

“The diaspora has continued to come together in various forms,” said Wilson, who has visited the Sudans dozens of times since 2005 for the U.S. Institute of Peace and for her Georgetown University dissertation on “blood money” retribution. “I think what made this one unique was the radical hospitality, as it’s been called here in Lexington. I’ve not seen that before.”

Members of various local churches picked up the visitors at airports, offered their homes and kitchens, helped with funding and organizing, and even joined in some of the conference sessions and the Sunday morning service at Grace Episcopal Church.  That local engagement was something Wilson said she had not seen in previous gatherings she attended Boston and Minneapolis.

The conversations at the conference revealed a variety of projects and experiences with deep roots in South Sudan and with techniques of mediation. These include:

At the start of the Sunday service, which packed some 200 worshipers into Grace Episcopal, acting rector Rev. James Hubbard welcomed those who came from South Sudan or Roanoke, “from North and South, East and West.” The Archbishop of South Sudan, the Most Rev. Justin Badi Arama, who had come from South Sudan with his wife, Joyce Solomon Eremadowa Modi, was the celebrant for the eucharist.

Other priests in the service were the Most Rev. Heath Light, retired bishop of the Episcopal Diocese of Southwest Virginia; the Most Rev. Patrick Augustine, the Episcopal bishop of Bor, South Sudan, and the Rev. Richard J. Jones, emeritus professor from Virginia Theological Seminary, who gave the sermon.

“We welcome all men and women,” Hubbard said, “all gay and straight, all black and white, Asians and Native Americans.” Christians, Muslims, Jews and “those who do not claim a faith tradition.”

Mayor Frank Friedman greets the gathering on Friday night with a prepared statement.

Why did the South Sudanese Diaspora Network for Reconciliation and Peace (SSDNRP) come to Lexington, after its precursors had met in cities such as Des Moines and Denver?

The answer is Marc Nikkel, a much-respected teacher and missionary in southern Sudan from 1981 until his death on Sept. 3, 2000. Nikkel was ordained a deacon by Bishop Light, then became a priest in southern Sudan.

Last year, Grace Episcopal Church was planning a celebration of The Feast of Marc Nikkel for this Sept. 1. But it could not get a commitment for a visiting preacher involved in the South Sudanese diaspora movement. Hubbard finally asked, What’s the problem? The SSDNRP might be having its first conference that weekend, but was unable to find a willing venue.

Why don’t you come to Grace Church, he offered. And so it happened.

In 1987, armed fighters in the Sudanese Peoples Liberation Army abducted Marc Nikkel from where he was teaching college in Mundri, the Sudan. It was July 7, in the middle of the night in that hot, war-ravaged country.

The guerilla soldiers held Nikkel in their camps for six months, but didn’t harm him. They had too much respect for him, or at least knew the great respect so many others had for him. They only wanted to know, as he heard them demand through clenched teeth that first night, “Why didn’t you leave when you were ordered?”

“He was a man of God,” said Bilal during dinner at Grace Church on Friday.  Nikkel had been Bilal’s mentor and seminary instructor in the 1980s. When Nikkel left Africa in 2000 in the final stages of cancer, he told Bilal not to cry at their parting. He seemed happy, Bilal said. “He said we will be able to meet again.”

Lengthy religious letters from Nikkel in the Sudan and various places of exile from 1981-2000 were published in a book called “Why Haven’t You Left?” Sue Bentley, the Episcopal priest at St. James in Roanoke, remembers reading some of those letters addressed to the Episcopal Diocese of Southwest Virginia. She and Nikkel had gone through ordination from that diocese together, under Bishop Light.

At the service Sunday, Bishop Light spoke of the interdependence of members of “the Body of Christ” that brought the Diocese of Southwest Virginia together with the Episcopal Church in southern Sudan. He said the process was called Mutual Responsibility and Interdependence, an alternative to the us-helping-them paradigm.

“Each church has something to offer and something to receive,” Light told the congregation. “I offered an invitation to the Church of Sudan, but I’m also aware of what we’ve received, and it’s significant. We received prayers, we received Marc Nikkel, who lived in this diocese, went to seminary here. . .That is a gift that the Sudan has sent to us. And now we are privileged to have another gift in Archbishop Justin.

“He brings the witness of a people who have suffering and who continue to be a community in separation here in this country,” Light said. “We have been enriched by their presence and in the relationship.” His words provoked something unusual for an Episcopal church service: applause.

Most conferences include a lot of unplanned conversations and networking, but that seemed to be the serious heart of this one, by intention. Jacqueline Wilson, the mediation consultant, said she had left the U.S. Institute for Peace to explore a different “paradigm” from the standard “cease-fire” peace accords that are only between the armed actors.

Those sorts of peace accords are rarely sustainable or “transformative,” she said. She has come to believe the problem is that negotiations between armed actors need to include civil society, such as people of faith and religious leaders. “Leverage can be gained through the inclusion of other parties, other stakeholders, to put pressure on the armed actors and to hold them accountable,” Wilson said in an interview.

A transformative peace process needs “process design and mediation skills,” she said. The Lexington conference was intended to be part of such a process, with “adult-learning principles” of engaging everyone rather than dishing out lectures and expert panels, Wilson said. The conference program included a 10-point “Discernment Listening Guidelines,” such as this: “Do not challenge what others say. Let go of the need to be right.”

Sharon Massie, program director for Grace Episcopal, spoke for about 10 minutes to the conference about such a “transformative” process that had taken place over a difficult two years at her church, around its being named “R.E. Lee Memorial Church.”

The name, to honor Lee for his leadership role in the church from 1865 until his death in 1870, was changed from Grace to R.E. Lee in 1903. In 2015, the mass shooting of black church members by a neo-Confederate in Charleston, S.C., prompted a difficult discussion around whether the “Lee” name should be changed.

Massie described how the church hired professional consultants who guided a team of six parishioners on a process designed to be not “conflict resolution” but “conflict transformation.” The consultants cost the church $16,000. The team, after nine months of intensive work and “listening” to the congregation, reported back a host of recommendations. One was to restore the original name, Grace.

The vestry, in a second split vote, rejected that recommendation. Then the deadly Charlottesville protest by white nationalists took place in August 2017, and the name-change re-emerged. It passed by another split vote. Massie described how the process had led to a deep transformation that was visible everywhere in the success of this conference.

Several people came up to her afterwards to say that her talk was “powerful,” she said.

On Sunday afternoon, conference attendees made commitments to take specific actions back home around three areas, written on a tear sheet on an easel as “Reconciliation,” “Hate Speech” and “Tribalism.”

“We did brainstorm how to deal with reconciliation and healing, mitigating hate speech, and mitigating tribalism,” Wilson said. “Maybe acknowledgement (of wrong done in the past) may be enough. We couldn’t get that specific because each situation is unique.”

The results of the conference seemed to be summed up in a song that Grace Episcopal’s music director Martha Burford taught the congregation at the Sunday service, “The journey of a thousand miles begins with . . . one step.”