The American South isn’t the only place where heritage groups claim a particular day to wave their flags. 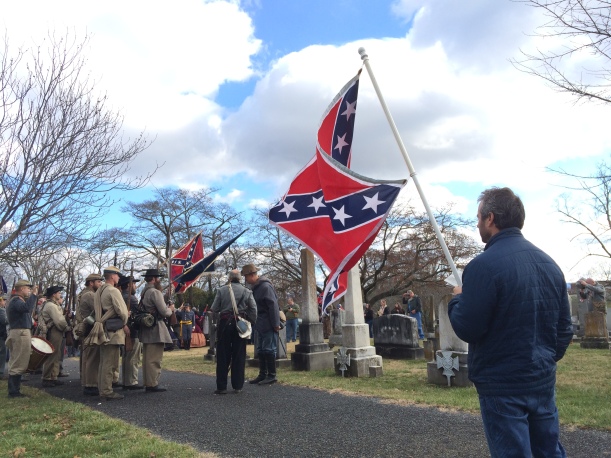 When I was in Northern Ireland a few years ago, a nervous public waited to see whether the traditional July 12 parades of the Protestant Orangemen, dressed oddly enough like Edwardian bankers of London, would re-kindle old hostilities as they marched through Catholic neighborhoods. They carried Union Jacks and flags of the bloody hand. But good behavior on everybody’s part kept things calm that year.

A similar civic pride was displayed in South Africa under apartheid, as I learned when I visited the imposing Voortrekker Monument outside Pretoria in the 1980s. The central identity story of the white Afrikaners was the Covenant – the belief that their ancestors made a vow with God before the Battle of Blood River in 1838, and that God kept His side of the bargain by helping only a few hundred of their armed men slaughter thousands of Zulu warriors, and suffer no casualties. The Day of the Covenant was celebrated every year on Dec. 16 until the new South Africa under Nelson Mandela changed the name to Day of Reconciliation.  It is still a public holiday in South Africa.

Northern Ireland and South Africa are beautiful lands that have achieved a relatively miraculous peace after long histories of bloody conflict. Both of these holidays, with their parades and saltire flags, recall some part of the bloody conflict. The Orangemen of Ulster are celebrating the victory of William of Orange’s forces over those of the Catholic King James II at the Battle of the Boyne in 1690, on the banks of the Boyne River in eastern Ireland. The Afrikaners looked back to their triumph at the Ncome River in Natal Province.

Folks here in Lexington are stirred up again about the Confederate flag. Once more, the unresolved civic symbols of Martin Luther King Day and Lee-Jackson Day fall crosswise in the middle of January. But this time, a new group called the Community Anti-Racism Education (CARE) Initiative succeeded in getting a parade permit for Saturday – Jan. 14 – that was traditionally the day the Sons of Confederate Veterans marched in honor of Generals Robert E. Lee and Stonewall Jackson, flaunting their Confederate costumes and flags. This “Martin Luther King Jr. Community Parade” commences at 10 a.m. from the historically black Randolph Street United Methodist Church.

Five years ago, the local chapter of the Sons of Confederate Veterans felt excluded from a heated public hearing when the Lexington City Council was considering putting an end to Confederate flags on city-owned poles during Lee-Jackson weekend, such as along the bridge over the Maury River. City residents, overwhelmingly in favor of the ban, packed the council room before the flaggers arrived. About 30 or 40 supporters of the Confederate flag, after holding a rally on Hopkins Green, had to wait outside the room. Besides that, the council decided to let people speak in the order in which they signed up and to let city residents speak first.

The ordinance, which passed 4-1, banned from city streets all flags and banners other than those of national, state and local governments, without prejudice. This official neutrality protected Lexington from the charge of unconstitutionally infringing on free speech, the claim of a federal lawsuit that the Sons of Confederate Veterans filed, and lost.

Having been preempted again by local opponents, the Sons of Confederate Veterans took out a permit to march on Sunday, Jan. 15, at 3 p.m. The following day, Monday, is the official King Holiday this year. A more flagrant group of Confederate activists called the Virginia Flaggers withdrew its request for a parade permit on King Day, but may well gather at Stonewall Jackson Memorial Cemetery in Lexington on Friday, Lee-Jackson Day, or sometime over the weekend. No permit is required for that.

What is a good, civil response to all this?

A friend of mine who feels the anti-racism CARE parade may be unduly provocative – what he called “poking the bear” in his local newspaper column – had an alternative suggestion. He said citizens should line Main Street for the Confederate flag-wavers parade, turn their backs on it and remain silent. My son, a former Marine, suggested Lexingtonians should join the Sons of Confederate Veterans parade with white flags of surrender, to remind us of the final flag of the Confederacy that mattered the most.

A century later, my Southern family was witness to another historical turn. My father covered the Civil Rights movement for Newsweek magazine. He knew the smell of tear gas and the hair-raising harmonies of mass meetings in black churches. Against the background of that great moral crusade, growing up, my siblings and I saw the Georgia state flag changed to include the Confederate flag in 1956 as a sign of defending segregation, and I noticed that flag popping up in bad places, at Klan marches and on billboards calling King a communist and Chief Justice Earl Warren impeachable.

When I look at the Virginia Flaggers’ website, I get the impression that the Confederate battle flag means something else to them now. I sense that it has more to do with a cultural identity in an age when that identity is under attack and disrespected. The Afrikaners and the Protestant Unionists of Northern Ireland have good reason to worry about the future of their identity. But the flaggers need not be so defensive. Let other tribes celebrate distant wars their mythic forebears won. Let us remember that the Confederacy lost, and seek to understand the profound meaning of that loss. This is the larger identity that includes our many distinct identities, thanks to another flag, the white flag of surrender. The American idea won – in 1865 and in 1965.

If there’s a Southern heritage to honor and practice, I think it was best expressed by the first speaker at the 2011 city council hearing on the flag ban. Patrick Hinely was the only speaker that night who criticized both sides – the city council for borderline censorship and the flaggers for beating a dead horse. To both, he recommended common decency. He received only a smattering of applause, and the council decided at that point to ban any further applause.

Hinely didn’t bring up race, but it has always seemed obvious to me that when any group says that a symbol or word is offensive, it is up to the offender, not the offended, to have the common decency to desist. Hinely put it this way: “Growing up in the South, I came to understand that a fundamental element of the unwritten code of proper comportment in polite society is that a gentleman never gives offense to anyone unless it is absolutely necessary. In this case, it is not.”

A much shorter version of this was published in The Roanoke Times, Jan. 11, 2017.