I was just beginning, in that clammy
August, to pick up the riff of the teaching gig
when I flew from New Orleans off to Miami,
the two U.S. cities we journalists dig.

It felt like betrayal of old newsroom friends
to be hot in pursuit of another career,
where readers are counted down in the tens
and deadlines perk up about once a year.

Abject, name-tagged, I joined the whir
of meat-market interviewees on the path,
blind to the grandeur of the gaudy Fountainebleu,
figuring long odds, doing the math.

Then (on cue, play the James Bond theme),
across the lofty lobby’s dazzling space
you appeared on the minute, as out of a dream,
a civilized, intelligent embodiment of grace.

How we clicked, over coffee, playing Who do you know?,
our geographic coordinates just out of sync —
you were the editor I needed years ago,
and now my professor type, tinged with ink.

So thanks for that appointment, and this scene
of liberal arts, news and philosophies,
for a tenure track through a valley so green.
How lucky this family of news refugees! 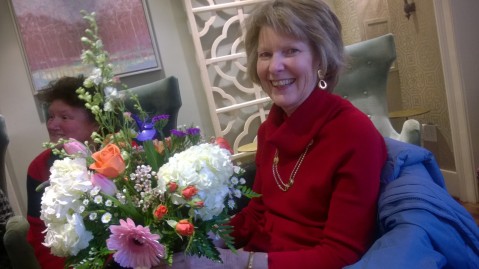 Pam Luecke, at TAPS, Lexington, a toast to our colleague stepping down as department head.