“The committee further recommends that the name of the church be officially restored to its former name of Grace Episcopal Church, to be completed no later than the last meeting of the current vestry.” 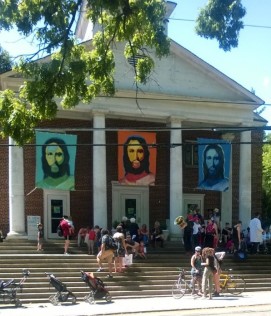 In one of Atlanta’s flourishing in-town areas, Candler Park, the portico of an old United Methodist Church is hung with three big canvases, each about 12-by-6-feet, like colorful sails. Each one is the same cool portrait of Jesus’s face, but in different colors like an Andy Warhol triptych of Marilyn Monroe. Beneath these banners on April 22, Earth Day, was a happy crowd of New Orleans-style musicians getting ready to play for the March for Science Atlanta.

I was visiting my old hometown, and the day was gorgeously April blue, so I joined my cousin Mimi for the march. The Atlanta Coalition Ensemble, the band tuning up on the church portico, seemed to have enjoyed getting costumed for the event. The purple bell of the Sousaphone was decorated with a spray of Christmas lights, and the heavily bearded man playing it was wearing a lab coat.

It was not the parade so much as this church that caught my attention. Mimi, who works for a global health-and-religion program at Emory, said it had been called Epworth United Methodist, but the “Epworth” was removed. I could see where the word was literally removed from a post in back that said United Methodist Church. It is temporarily called the New Atlanta United Methodist Church, a merger of Epworth and one of the big established Methodist churches in nearby Druid Hills. I was shocked to learn that this other church, in a ritzy area of Atlanta, had dwindled so much that it needed to merge with Epworth. Now grafted into this old church building, the new congregation is growing, discovering new life, and looking for a name.

“It’s so interesting,” Mimi said. “Churches are reinventing themselves.”

At R.E. Lee Memorial, we are also seeking to re-invent ourselves, in our very different little town of Lexington. The name of our church is held dear to many long-time members, but is troubling to other parishioners. How it is taken by outsiders is also split, apparently – some people are glad to see a church have the nerve to name itself for the legendary Confederate general while others are as offended as they would be if they saw a Confederate flag instead of a banner of Jesus out front.

While I lingered in Atlanta on Sunday morning, my church in Virginia held a parish meeting at which the Vestry presented an important report about how our church can re-invent itself. From what I’ve heard, the controversy remains in suspended animation. And so my hope and heartbreak remain in a kind of suspended animation.

Two years ago, I was scared that we were headed for a bad split over the name. Our attempt to listen to each other’s points of view, to find compromise and God’s will, never got beyond the opinions held by each side. As a Vestry member, I was forced to vote my conscience, to change the name, but as a professor of communication, I was dismayed that we had no plan for how to make this change in a way that showed respect for Robert E. Lee. My biggest fear was a bunch of national news stories about how a faction of the church had made a knee-jerk decision in the wake of the Charleston shootings and, in another battle of political correctness, had blotted out its own history and the name of Robert E. Lee. We kept the name, barely.

We needed healing after that. I worked hard to help create the committee for healing and reconciliation, which named itself “Discovery & Discernment.” I had no idea what it would come up with after nine months of intense and careful work, under the guidance of two consultants that cost us $16,000.

I now see that what the committee came up with was worth the time, prayers, effort, and money. The Vestry approved almost all of the recommendations, but rather than split along the old fissure, we found consensus only in an ambiguous statement that we “may at some point” restore the earlier name of Grace Episcopal.

Yes, we may. Or we may not. “At some point” could be five years from now, or 20 years. Or never. I don’t mean to quibble, but it could also mean next month. We should take that shot.

No one in the beginning expected the committee to suggest we re-visit the church name. But now I see how it fits with the entire committee report – especially creation of a sub-committee to highlight Lee’s historic role in our church, with “deep respect and appreciation,” and work on separating our proud history from our Christian mission.

The Vestry approved those elements. But I am disappointed that we are punting on restoring our historic name. We could go for a touchdown. Thanks to the D&D committee’s work and report, we are in the best position we will ever be in to do the hard but right thing. I think this moment of grace will not last more than a month or two.

Half the Vestry feels otherwise, that waiting until the congregation is more settled and “ready” is the right approach.

Two years ago, I couldn’t figure out how we could change the name without a majority of the parish condemning our action, along with much of the community and the wider world. In the future, after the committee’s work fades from memory, the parish will be in the same situation. Why would a future Vestry even bring this up? It if does, it would probably be from a faction that has little respect at all for Robert E. Lee (such people are in our church now, though leaving steadily, or at least willing to live uncomfortably with the name).

What the D&D committee handed us, on a silver platter costing $16,000, is a way to solve this problem now, a brilliant compromise. It listened deeply to the congregation, and found a solution: honor Lee, tell the story of his role in our church, emphasize our history, but separate our history from our mission. Lee would want us to recover the name that he knew and loved. It is at once respectful, historical. . . and beautiful: Grace.

Once done, while some might feel hurt, at least this time there would be an authentic, faithful process behind it. The future would be a gift to everybody. God smiles. That controversy would be over. This may be the last time we can do this in a way that is truly respectful of Lee. It would break my heart to see it left to be done, or not, in some other way, at some point in some future of a church in decline. 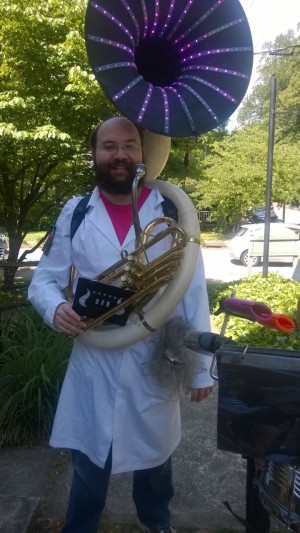