Closing up shop, boxing equipment in the basement classrooms of the beautiful old Corboli building, I feel a sadness more stinging than the loss of the car keys or wallet (not mine, for the record) on last night’s trip to Riccione. (We had a four-course feast past 10 and moon rise on the beach at Ristorante Mariscos, conducted by our Sugar Cafe friend, Giovanni Garbugli, who  demonstrated beach bocci for us.) 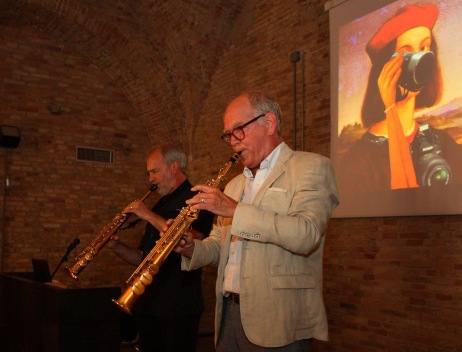 That was a fine farewell last night. It began with our traditional Raffie Awards ceremony in the giant brick tomb of the Sala del Maniscalco, below the palace wall. Michael and I were The Sopranos – our one chance to show off the only saxophones we could carry on a plane. The students didn’t seem impressed.

Raffie winners, on the beach in Riccione

Nearly four weeks ago, when the students heard about the Raffies, Alli Baxter told me she and Liza (whom I was mentoring and editing for their shepherd/sheepdog/pecorino stories) want to win a Raffie to make me proud.

Well, Alli’s story did win the Raffie for best text story, Liza and Alli’s video was a runner up, and Alli won for overall multimedia package.

The other students I mentored and edited also did me proud. Kelsey and Eliza turned in great packages on the coolest preschool in the world. Thank you, all. Great work!