The sky over the Wright Brothers National Memorial is a dazzling blue playground dotted with kites. In that blue, a slow cub plane pulls an advertisement that says, “$15 Rides All Day. . .OBXAIRPLANES.COM.” The sun is blinding. It’s hot, in the 90s, and the stunted grass planted over this national park at Kitty Hawk in the Great Depression harbors 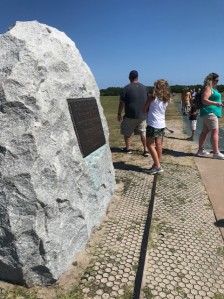 sand spurs and tiny cacti. But visitors from toddlers to grannies are here in the hundreds, and they seem to be enjoying plenty of liberating space and open air. A young woman is jogging the paved walks that wind up and down the Big Kill Devil Hill that is crowned by the 60-foot Art Deco memorial. She is sweating, wearing earbuds. The Wright brothers struggled up this giant sand dune with their glider more than a hundred times before the slopes were planted with green ground-cover to save it for history. Warned to stay cool and drink water, the jogger says in passing, “I do this a lot.”

My wife and our friends at this Nieman class reunion all head for the Visitors Center, with its modern cypress paneling, smart snippets of history, its reproduction of the two-prop biplane that flew four times on Dec. 17, 1903. . . and good air conditioning. This Visitors Center has just undergone a two-year renovation of its mechanical systems. It’s up-to-date in every way. But I felt an itch to see the world’s first runway first. I couldn’t wait to go to those two old sun-browned outbuildings (reproductions of the brothers’ wooden work sheds), and trek to the lofty Memorial. From a distance, the memorial reminds me too much of the sad Voortrekkers Memorial in South Africa, but up close, I found it deeply moving. It invites Americans to contemplate the bottomless meaning of what the Wright brothers did. Or I should say, “limitless” meaning.

It’s where Man took off. On the 50th anniversary of the Moon Landing this month, it’s good to visit that first liftoff from earth 66 years before that. It was important to be first: For America to be first (Mankind’s and DaVinci’s old dream tripping out of self-educated tinkerers in a bicycle shop in Dayton) and for Wilbur and Orville and little-credited sister Kate to beat those other guys (in the way of American enterprise and competition), Langley in Washington, Whitehead in Connecticut. Deeper meanings, still: I remember from a deceptively sing-song-y poem by Robert Frost he called a “skylark,” a mile-long poem of three-beat lines and silly rhymes called “Kitty Hawk.” In that poem, he hides a little of his incarnational Christian belief that is also the bedrock of my faith.

. . .God’s own descent
Into flesh was meant
As a demonstration
That the supreme merit
Lay in risking spirit
In substantiation.
Westerners inherit
A design for living
Deeper into matter
Not without due patter
Of a great misgiving.
All the science zest
To materialize
By on-penetration
Into earth and skies
(Don’t forget the latter
Is but further matter)
Has been West Northwest.

Aside from spirit-in-matter, and the Frosty idea that science’s historical path has been west-northwest, I am struck by another way to see what the Wright brothers did. They kept their secret away from the world. As they perfected the yaw, pitch and roll of the wings, as they improved on their chain-driven propellers, they kept their work militantly private. Off on the Outer Banks on repeated trips, they didn’t talk to the press or to Alexander Graham Bell or the gossipers back in Ohio. They only talked to a single patent lawyer at home. They made sure they had pictures, drawings, proof. But they didn’t seek publicity. They sought the patent, and the credit of history.

“Be in known that we, Orville and Wilbur Wright, citizens of the United States, residing in the city of Dayton, county of Montgomery, and State of Ohio, have invented certain new and useful Improvements in Flying-Machines, of which the following is a specification.” So begins their patent of May 22, 1906, reproduced in the Visitors Center.

What they were about was not only Mankind’s leap off of the Earth, but also exercising a Constitutional right. Article 1, Section 8, number 8, gives Congress the power “To promote the Progress of Science and useful Arts, by securing for limited Times to Authors and Inventors the exclusive Right to their respective Writings and Discoveries.” They had contacted the U.S. Weather Service to ask where they could find an open, sandy place with steady winds. “Kitty Hawk, North Carolina” would be the best, the federal agency told them. The feds were their collaborators. No one works alone under our Constitution.

More than a century after the Wright brothers, American inventors are losing those rights to China in two of the areas that will create jobs and possibly save the Earth: electric cars and photovoltaic solar cells. As I looked down from the Memorial onto that world’s first runway, with its thin rail, sized for bicycle wheel hubs, I was thinking: Who will capitalize on the great shift from a fossil fuel economy that is already underway? Sweet dreams and flying machines in pieces on the ground. It’s even hotter now, so I’ll head for the Visitor’s Center.